This example is of a system for dosing additives needed in the production of adhesives.
Given the type of dosing, characterized by the repetition of the operations to be performed, it has been decided to operate the plant by a PLC that is controlled by a LCD operator terminal.
The plant operates 3 tanks for resin, formaldehyde and latex load, other 3 containers in which the dosing and mixing of these with each other and with soda and water takes place, finally the adhesive produced is stored in 2 storage tanks.

Solenoid valves, pumps, stirrers are commanded in order to manage the plant. The state of the various areas is detected by load cells (for the measurement of the released amount), ultrasonic level sensors (for the detection of the filling level of the tanks) maximum level sensors are also used in order to ensure safety.

The operator terminal enables the user to perform the following operations on the plant:
- Display of the state of the plant, in particular tank levels and alarms
- Control of the cycle in progress
- Manual control of the plant
- Handling reset recipes or creating new recipes
- Control of tank calibrations (resets and data recordings) 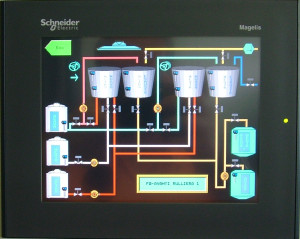 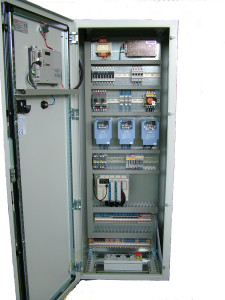